There is going to be a lot of fun in Bigg Boss’s Sunday Weekend War. The promo of the show has surfaced in which Salman says, ‘I will take the name of a member, he will come and tell the name of the member who will chaat according to his personality and feed him.’ For, Rubina says, I will mix yogurt because she lies white. He said that I will never come between husband and wife, but he did so. I will add sweetness because they hurt us by speaking sweet things. Bitter gourd sauce because the past few days saw a lot of bitterness.

Rakhi also calls Rubina false, bitter, and poisonous. After this, Salman asks Rahul to make a chaat for Arshi. Rahul says, there are sour people in them, they are very sour in their minds about whom they call friends. I will also add sweetness because sweet things entice everyone. If the chili paste is enough for me, then put the whole bowl. It has been made very bad, but I will feed it to you. 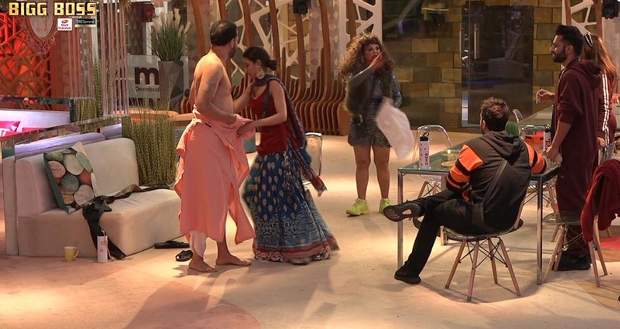 After this, Arshi also makes similar chaats, accusing Rahul. Rahul says again after that come to me at night and do not say this, you are my friend.

Actually, in this episode, Mouni Roy will also come who gives everyone a task in which the contestants are placed on a toy bull and the one who will lie will be rotated so fast that it will fall. Arshi is asked if she wants to be like Rakhi Sawant? Arshi says no, but all the householders lie to Arshi and then they get punished. After this, Rubina is asked if she is jealous of Rakhi? Rubina refuses and all contestants call it a lie and then Rubina is also punished.