On Tuesday’s episode of Colors TV’s reality show Bigg Boss 14, Nikolay Tamboli orders Devolina Bhattacharya to wash dishes. After listening to Nikki, Devolina refuses to wash all utensils. She says ‘I will not wash dishes alone.’ Listening to Devolina, Nikki says that two people will wash all utensils together. Abhinav Shukla, on the other hand, leaves Rakhi and washes the dishes with Arshi. Seeing this, Rakhi gets annoyed and says that from now on she will not have any relationship with Abhinav.

Devoleena tells Rakhi Sawant that videos of her and Abhinav Shukla are becoming quite viral. Arshi Khan asks Vikas Gupta if she looks negative. Vikas Gupta replies to her that she looks negative, but is playing well. After Ijaz leaves, Arshi talks with Ali and Rahul. They talk about Devoleena’s game plan by becoming their proxy. Arshi says that she does not trust Devolina.

The innovative competition will give Rubina

Abhinav Shukla, in the garden area of the house, tells Rubina that Rakhi Sawant was asking her who would turn back if both of them reached the final. Abhinav, on this matter, tells Rubina that if these questions were asked a few weeks ago, he would have named himself. But now they are not going to back down at all. He tells Rubina, now you play your game and he will play his game because he wants to win the trophy now. 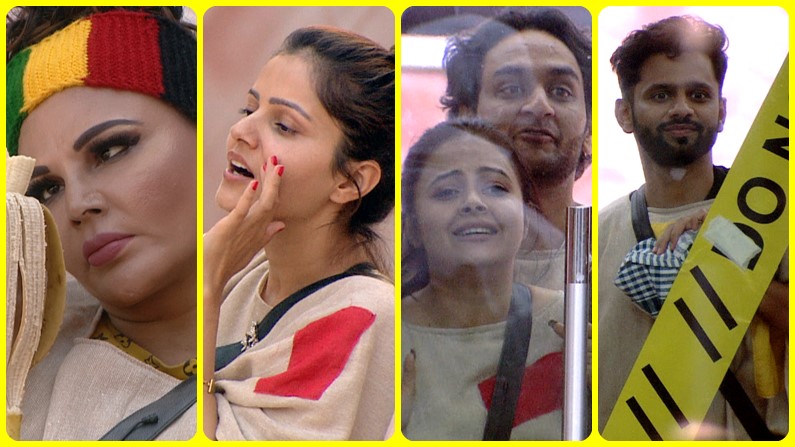 In the morning Rakhi Sawant starts flirting with Big Boss. She says that she had seven and a half rounds with Bigg Boss, she is his first wife. Hearing this, Ali Goni and Arshi Khan taunt him by calling them, fake love. Bigg Boss asks all family members to go to the bedroom. There too, Rakhi Sawant tells Bigg Boss in a fun-filled style that ‘You are telling me to come to the bedroom’.

For the food items, the family is given a new task by the Big Boss. In this task, the members of the household were divided into two teams. Nikki, Arshi Khan, Rahul Vaidya, Ali Goni, and Sonali Phogat are in the Yellow Team. At the same time, Abhinav, Rubina, Rakhi, Devolina, and Vikas are in the other team i.e. Red Team. The team that wins can get ration from BB Mall and the losing team will have to run from the remaining ration. Team Red’s captain is Rubina, then Team Yellow’s captain is Rahul Vaidya.

After Vikas Gupta and Devolina talk together, Devolina steals the survival kit given by Sonali Phogat’s Bigg Boss. There is a fierce debate between the two team members about this matter. Rahul Vaidya and Rubina do this with each other about this matter. Finally, Rahul Vaidya brings out the kit hidden inside Vikas Gupta’s bed and the game progresses.

Rakhi did toilet in clothes only

In this task, the points of householders are going to be reduced using everything inside the house. After getting Sonali Phogat’s kit, Arshi takes over the bathroom. She says she will not let other team people go to the bathroom. Hearing this, Rakhi Sawant fights Arshi Khan with slippers. Rakhi says that she is not in control and has to go to the toilet. It becomes so difficult for Rakhi to control it that she urinates only in clothes. She tells Rubina that you do not tell this thing to anyone and Rubina also agrees with them.

While flirting with Rakhi Sawant, Rahul had said that after Abhinav’s anecdote ends, he will flirt with her. Seeing Nikki shaking hands with Rubina, Rahul Vaidya tries to beat Rakhi Sawant. He convinces them to play for his side, but Rakhi does not agree. However, Rakhi is also flirting with him.

First, Nikki Tamboli from the yellow team goes inside the house. Nikki goes to the washroom and bathes and gives 6 points of Rahul’s team to Rubina’s team. Nikki says that no matter how good I do, Rahul’s team will not do anything for me. Better than that I do something for those I love. Rakhi Sawant goes inside after Nikki. Rakhi also changes her inner clothes. On top of this too, the family members create a lot of uproars.

The family members rose in hunger due to hunger

On seeing a banana, Rakhi Sawant cries that she cannot live without eating. All the households are suffering from hunger. Realizing his defeat, Rahul’s team says that he can also eat dal rice. In that case, burgers are shown to family members on behalf of Bigg Boss. To eat this burger, the family will have to give three points to the other team. Nikki goes to eat burgers. Rahul and Sonali repeatedly try to seduce Rakhi, who tries to cry after seeing the burger.

Quarrel again between Rubina and Rahul

Rahul Vaidya makes a personal comment to Abhinav Shukla about Rubina. Hearing this, Rubina gets very angry at him. Angry, Rubina pushes Rahul, and then Abhinav comes to the rescue. But things go wrong. Seeing Abhinav and Rubina dominating Rahul, his best friend Ali Goni comes forward to help. Then there is a lot of fight between Ali and Abhinav.