change the face of the capital Delhi and free it from the traffic jam, the draft of Master Plan 2041 of Delhi has come out. The draft master plan has projected that the population of Delhi will increase from 2.6 crores to 2.92 crores by 2041. The proposed plan has been prepared to keep in view the needs of the population. According to the draft Delhi Master Plan (MPD) 2041, prepared for the development of Delhi over the next 20 years, affordable rental housing, full-fledged residential areas, and small-format houses will be some of the key points of housing development in the national capital. . Objections and suggestions have been invited from common citizens by making the draft of the master plan public.

The Capital Master Plan has been extended to the concept of a 24-hour city. Under this, such circuits will be identified where there can be continuous work, cultural activities, and entertainment activities at night. Rajdhani can also be promoted as a safe city for nightlife. In addition, there will be a focus on the service market to support local turnover.

Master Plan 2041 of Delhi envisages a transport system equipped with modern technology to encourage the use of public transport. This ranges from strategic corridors to redevelop the historic ring rail network to strengthen high-speed connectivity. Under this, it is proposed to explore the possibilities of premium, app-based bus service, DTC, and express routes of Metro. The draft states that a comprehensive mobility plan (CMP) will be prepared to integrate city transport at all levels. The link routes will be developed as “Transit Priority Corridors”. 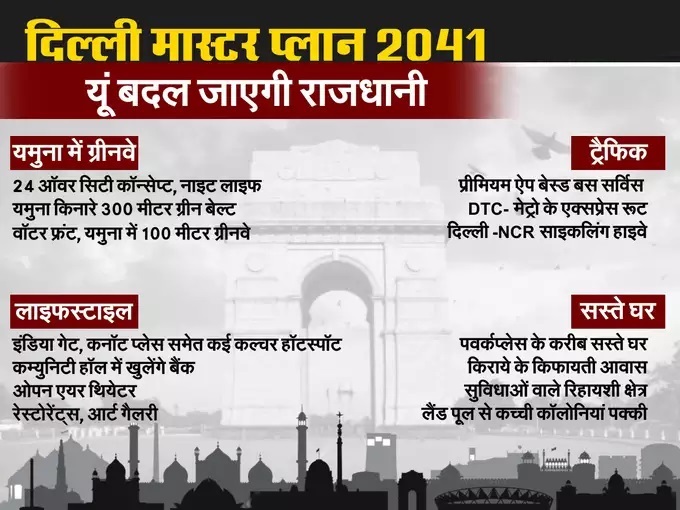 Walk-ways to reduce pollution, focus on

cycling New rules have been included in the new master plan of 2041 to build cycling highways to connect Delhi-NCR, such highways will have to be identified by the local body. The draft also focused on building walkways and cycling to reduce the congestion and pollution caused by vehicles. Along with this, there will be the facility of barrier-free and continuous walking. As a solution to the problem of parking, it is also proposed to increase the parking facility thereby making the bus depot and terminal multistorey. Delhi is the cultural capital. Now the place will be ready here as a city hub. In this, a public waterfront will be built on the banks of Yamuna.

Proposal to make the banks of drains a green corridor

The draft emphasizes the need to address the inequality in the green space in the capital. Apart from reducing air, water, and noise pollution, there is also a proposal to make the Yamuna free from pollution. Under this, work will be done on the Blue Green Policy for the next two decades. According to the draft, there is a need to increase greenery in some such dense areas in the capital. For natural greenery, work has to be done to plant native trees by removing trees of foreign species. Delhi has 200 natural drains, which spread across the Najafgarh, Yamunapar, and Barapula drainage basins. A proposal has been made to build a green corridor along its banks.